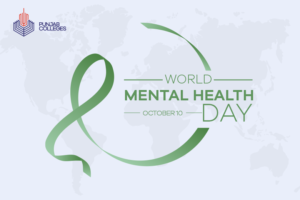 Mental Health is the overall health of a person’s emotional, psychological, and social well-being. Over the years, distinctive disturbing elements like damaged personal life, endangered social belonging, and violence in surroundings affected human beings on physical, emotional, and psychological grounds. Therefore, an International Day of Awareness regarding mental health is observed every 10 October by WHO (World Health Organization) as world mental health day. Every year, new themes are incorporated to support the world’s habitat better place for all!

What is Mental Health?

Mental health is an individual’s capacity to feel, think, and act to achieve a better quality of life while respecting personal, social, and cultural boundaries. Impairment of any of these is a risk factor for mental disorders or mental illness, a component of mental health.

What are the Mental Disorders?

Mental disorder, also known as a psychiatric disorder or mental illness commonly. A mental disorder is a pattern of behaviour or thought that seriously distresses a person or impairs their ability to operate. These characteristics may be ongoing, relapsing, or only present during specific episodes.

There are numerous illnesses. Furthermore, the indications and symptoms of each differ significantly. A mental health expert may diagnose such conditions, typically a clinical psychologist or psychiatrist.

World Health Organization (WHO) has listed mental illnesses as follows.

Behavioural disturbances like extreme fear and worrisome are a part of anxiety disorders. When the issue remains unaddressed, symptoms worsen with time, resulting in severe difficulty in normal functional behaviours. The patients remain in distress and in a state of disbelief.

According to studies, around 280 million people lived with depression in 2019. Depression is a severe dullness in the mood. It is different from regular mood fluctuation and natural emotional responses.

Human anger, reaction, dullness, and mood swings are natural ways to respond to challenges that a human being faces. However, the extended episodes are depression if a person feels sad, irritable, and empty inside for at least two weeks. In addition, the person losing interest in beloved activities is a major sign.

Bipolar disorder swings the person between two extreme mood fluctuations. The condition may include severe depression and intense energy episodes. The person may feel down, with no interest, for one second, while in the next, he may feel energetic, happy, and vibrant. When this condition is long-lasting and ever-staying, it could be a symptom of bipolar disorder.

As the name discloses, post-traumatic stress disorder (PSTD) spouts out of the threatening, scary and harmful experiencing incident, event, or several events of similar nature.

Schizophrenia is characterized by significant obstacles in perception and changes in behaviour. Symptoms may include persistent delusions, hallucinations, disorganized thinking, highly disorganized behaviour, or extreme unrest.

Eating disorders are the phycological problems associated with eating. Either a person eats too much or too little. Therefore, the weight, health, and life of people affected by eating disorders get at stake.

One in every eight people is affected by some sort of mental disorder. Mental problems cause severe problems in thinking, emotional regulation, and behaviours.

The causes of mental health problems are all factors compromising human peace and happiness. However, the main reasons are classified as the following.

If any person in the direct bloodline has been affected by mental problems, the risk of being prone to mental issues increases. Likewise, with violence and no supportive hand, people become affected and indulge in disturbing surroundings. The escapes could be drugs and unbalanced personality traits like narcissism and uncontrollable emotions.

Bad experiences at home, at work, with friends, and in relationships can push any person to the verge of emotional damage.

Women are more prone to mental health problems in comparison to men. The underlying factors are social, economic, and personal issues. However, women talk about things more. Due to talking, they try to get their stress levels down. Women face issues like sexual harassment, poverty, problems at workplaces and due to medical conditions.

Men have the colossal canvas to play. However, they fall prey to mental problems more at an early age than females. However, after a certain period, the men have lesser mental health issues.

Men have many coping mechanisms like healthy eating habits, regular exercise, busy schedules, achievements, friends gatherings, and social meetups. Still, it is observed that men die more out of suicide, which is not caused by depression. On the other hand, drugs are more common in men as compared to women.

Mental health stability is necessary to have in any person and society. Close look-up and observation are required to identify the individual and social factors affecting the mental health triggers.

Regular work is needed to prevent mental disorders and promote mental health worldwide. This work is not limited to the health sector of the country. However, every unit, as a family, extended family, and friends, is required to come close and talk about disturbing things together.

Supporting each other in demanding situations is required to promote mental health. To decrease suicides, drugs, and disorders.

However, if any problem encounters. Proper health treatments, medications and supports are available all around the world.  Doctors consultation and psychiatrists are available for help!

A post shared by Punjab Group of Colleges (@pgcworld)