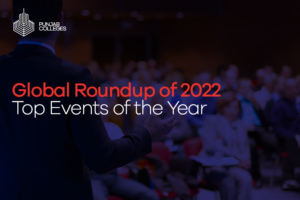 2022 is about to end, and we are entering a new year of Christian calendar-2023. This year has been a roller coaster in multiple areas for people around the globe. We have penned down the most exciting, and thrilling events of these 365 days in this article. Let us have a roundup of what our world has been through in 2022.

Whenever future historians or analysts will look-back to the course of history and events unveiled, they will find 2022 as a pathway between two different time zones. It is like existing one and entering the other world. Let us look at the major political, economic, sports, and innovation events that positively impacted the planet.

United Kingdom gets Its new KING

In 2022, the major world event was the coronation of King Charles III after the tremendous era of Queen Elizabeth II concluded in September 2022. After being the most prominent serving heir of the British Monarch, Charles accelerated to the throne on September 8.

His mother wrote a remarkable, delicate, and promising history of running the largest monarch in the world.

The ruling president of the people’s republic of China enlightened his name in history in 2022. In the same year, he was re-elected for a record-breaking third time as the General Secretary of the Communist Party of China (CPC) and, consequently, the nation’s president. Xi is most liked for his nation-building policies.

Climate has been a crucial point of concern this year. Many legislative measures and practical steps were taken in 2022 to safeguard the world from the adverse effects of climate change. US-approved legislation, the EU aimed to decrease carbon emissions by 55 per cent. Similarly, at the COP27- climate summit in November, it was decided to set up a loss & damage fund to help developing countries to combat the climate change crisis, which are the lesser contributors.

Furthermore, research has been initiated to reverse the crises. And the business community around the globe showed climate leadership properties.

Another great news of 2022 is the return of a few endangered animal species from the brink. The Wildlife Comeback Report, released in September, listed beavers, bison, and pelicans as the species that have defied the trend. The majority are the focus of reintroduction initiatives, notably the bison, which is once again roaming England after thousands of years.

Other significant success stories include the tiger emerging from the depths of the abyss, the fin whales making a comeback, and the rhino returning to Mozambique.

In 2022, significant changes were witnessed in the social-media world. It happened when Elon Musk bought the micro-blogging website Twitter for $44 Billion on October 27. Musk made major changes in the operational aspects of the social media platform.

Technology advancements are on their boom in this decade. 2022 never fails to amaze us when it comes to innovations. The most prominent development is the progression of artificial intelligence to the point that it becomes the companion of elderly persons in society.

ElliQ is an AI that provides senior people care and functions as a companion. They are led through guided meditation and exercise routines by the AI. It converses with the elderly, aids in their memory of momentous events, and alerts them when food is running low. ElliQ can also provide family members with updates on the health and overall well-being of the older person, depending on the user’s permission.

Beijing became the first country to host Winter and Summer Olympics. In February 2022, China hosted Winter Olympics. It also stands tall in countries having the most gold medals in Olympics.

Corona Virus, aka, Covid-19 emerged in late 2019 and exploded around the world in early 2020. The situation was disastrous and resulted in major deaths and ailments. People were devasted, out of contact, and in social isolation.

The work, education, business, everything shifted from physical presence to online metrics. However, in 2022, the push and wrath of Covid-19 decreased to its maximum potential and restrictions were uplifted worldwide.

Qatar wrote history by hosting the mega sports event – FIFA World cup 2022. It was the first time that World Cup was held in the Arab and Muslim worlds. However, it was the second World Cup staged fully in Asia after the 2002 competition in South Korea and Japan, and it was held in Qatar from November 20, 2022, to December 18, 2022.

That is supported by the most recent Social Progress Index, which was released in November. It evaluates 169 nations’ quality of life annually and provides scores for individual countries and the entire world. Despite the good news, the index revealed uneven and declining improvement.

For instance, the UK was listed as one of four nations experiencing a “recession of social progress.” Venezuela, Venezuela, and Libya were the other three. Thankfully, a different survey discovered that, despite efforts by some to split the UK, a tolerant middle ground rule. A “surprising and comforting sensation” of oneness was noted.

2022 was a hinge in the path of the history of the world. So many intense events shook the world and left people in grief. Yet, this world works on the element of Ying-Yang. Likewise, where it is bad, there is good also. We have listed some positive things to share our hope and strength of belief that tomorrow will be even better!