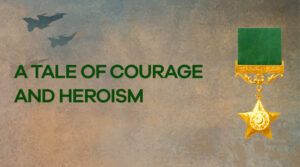 In the hardest of times, living nations emerge stronger and more resilient. When the enemy threatened our survival in the 1965 war, the Pakistani people stood steadfast and resolute. To this date, every year on September 6th, Pakistan celebrates Defence Day to honour Pakistan’s successful defence against India, which marked the end of the 1965 war.

The entire world has watched the Pakistani nation’s devotion and tremendous sacrifices in standing firm with its military forces during difficult times. So, on this day, the entire nation honours the Ghazis and Shuhada who fulfilled their responsibilities to defend the motherland.

In addition, the Pakistani armed forces personified the spirit of bravery and selfless sacrifice in defending the country’s territorial boundaries. Thus, we pay homage to the valiant Shuhada who gave their precious lives in order to defend their country.

On September 6, 1965, the Indian army crossed Pakistan’s international borders without a formal declaration of war.  They targeted Lahore, Sialkot, and the desert areas of Sindh. The war lasted until September 22, 1965, when both sides agreed to a UN-supervised cease-fire.

The Indians crossed the international boundary of West Pakistan at 3 a.m. on September 6, 1965, and launched a three-pronged onslaught against Lahore. On the Punjabi plains, there was a fierce tank battle. The domestic Indo-Pak dispute escalated into an international conflict, raising concerns among superpowers.

This action by India was a clear violation of international law, the United Nations Charter, and principles of civilized behaviour among countries. In its arrogant aim to conquer the region, India tossed aside its international commitments.

The Indian invasion of Lahore was repulsed, and the invaders suffered terrible losses. With the assistance of the Pakistan Air Force, the Pakistan Army’s ground defence troops were able to delay and then repel the Indian attack.

On September 8, exactly two days after the Lahore attack, India launched its main attack against Sialkot, employing its armoured division and other strike formations. The largest tank battles since World War II took place during this seventeen-day conflict.

India suffered from major casualties in this war. Pakistan repelled an invasion of its territory by an enemy four times its size, and the entire nation rose to the occasion with strong resolve.

Every kid, man, and woman contributed to the war effort, whether it was to raise funds, train as civilian guards, or work as nurses in hospitals.

How Did the War Come to an End?

The United Nations led the main diplomatic effort to end the conflict, and a truce was declared on September 23, 1965. The events that took place are as follows:

The Soviet Union, which had remained neutral during India’s and Pakistan’s conflict, then acted as a mediator in Tashkent. On December 8, a Soviet government communiqué formally stated that Indian Prime Minister Shastri and Pakistani President Ayyub Khan would meet in Tashkent on January 4, 1966.

The USSR’s efforts at mediation led to the conclusion of the war, and a peace treaty was signed in Tashkent.

So many people have lost their lives fighting for our country in this war. However, 11 of the soldiers showed extraordinary heroism and were awarded the Nishan-e-Haider. Major Aziz Bhatti won the highest Nishan-e-Haider award for his exceptional role in defending the Bedian region of Lahore in 1965.

How is Defence Day Celebrated in Pakistan?

Every year, Pakistan celebrates this day and pays tribute to the Shuhada with great zeal and zest. The multiple ways we honour the sacrifices of our brave heroes are as follows:

The ‘change of guards’ ritual occurs every 6th of September at Mizar-e-Qaid and Iqbal’s mausoleum. The new cadets of the Pakistani Army replace their comrades on guard duty.

The Pakistan Army displays its heaviest weaponry, including tanks, missiles, and aircraft, each year as part of the celebrations on Defence Day. The parades and air shows occur across many cities in Pakistan.

In addition to attending the parades in person, you should watch the Defence Day events in Pakistan live from the comfort of your own home. All major news channels are broadcasting live coverage of the events. To maintain the spirit of sacrifice and patriotism, special documentaries featuring officers who are either active-duty or retired are broadcast.

Pakistan: A More Powerful Nation after the 1965 War

Pakistan emerged from the September 1965 war with India as a strong and self-assured country, proud of itself and its military capabilities. We stood as one nation.

With the assistance of the government, Pakistan’s Armed Forces repulsed India’s naked aggression across the international border. We forced them to accept a truce, return to the negotiating table, and quit each other’s territory. It was certainly the greatest hour of glory, and a day to remember for future generations of civilians and soldiers.