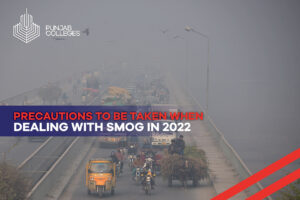 Lahore is the second largest urban centre in Pakistan, with a population of over 1 million. Metropolis often faces pollution problems arising for specific reasons. Since 2017, Lahore has witnessed a thick blanket of winter smog-causing serious discomfort. Residents have experienced severe health issues, and the increase in accidents was alarming. We have listed the precautions to take when dealing with smog in Pakistan in 2022.

Smog is the worst form of air pollution. The etymology of ‘smog’ goes back to the 19th century and combines smoke and fog to make ‘smog’. Smog is a common problem in urbanised areas in the world. However, Pakistan experienced ‘winter smog’ for the first time back then in 2017. Winter smog is caused in the winter season and is photochemical in nature. It is a category of air pollution brought on by vehicle emissions from internal combustion engines and factory gases. These pollutants interact with sunlight in the atmosphere to create secondary contaminants, which mix with the initial emissions and result in photochemical smog.

In the winter, air pollution frequently gets near the ground due to atmospheric inversions. It raises the levels of atmospheric pollution in cities. Los Angeles, Beijing, Delhi, Lahore, Mexico City, and Tehran are the top smog-polluted cities in the world.

Reasons for smog in Lahore

Lahore, the heart of Pakistan gets, covered in winter smog in late October for the last some years. The use of vehicles, crop burning, and industrial fuel usage are the local inputs to smog. In addition, the smog that arrives from the neighbouring country India worsens the situation yearly.

Pakistan shares the border with India in the areas of Punjab and Sindh. Delhi, the neighbouring capital, in November 2021, got the worst five-day haze streak since 2016. Moreover, according to epidemiologists and the World Health Organization, pollution could have caused an increase in the number of COVID-19 deaths in the same year.

The quality of air is measured by the air quality index internationally. The Air Quality Index (AQI) worsens during Pakistan’s Smog season. Lahore touches a hazardous level of air pollution during smog. In January 2022, the AQI level of Lahore in Smog touched 279 points which are very unhealthy.

Every winter, as winds and rain decrease, a brown haze high in sulphur and metals like lead accumulates over the subcontinent India and Pakistan.

People exposed to the developing pollution often become seriously ill, have shorter lifespans, or pass away before their time. During Covid-19, the situation worsened in neighbouring India.

While in Pakistan, doctors advise limiting outdoor activities and wearing masks. In addition, to reduce the use of vehicles and stop the burning activities of coal from reducing the toxic emissions. However, hundreds of people were sickening from respiratory diseases and cardiac problems during smog seasons.

Precautions to be Taken to combat Smog in Pakistan

The precautions to be taken to handle the smog in 2022 before the arrival of the winter season 2022 are crucial to be done. The cycle itself should be continuous in nature. Individual precautions are necessary for addition to implementing government-levelled policies to solve the issue.

The public can also take part in preventive measures alongside the government. Furthermore, people can take the following steps to stay safe while dealing with smog in 2022.

Government Policies to be implemented

Smog affects everyone differently; some people are more vulnerable to its harmful effects than others. Smoke fog or Smog in Lahore has severely affected the people. It is crucial to take preventive measures on an administrative and personal level to combat the smog in Pakistan.